One of the short films that’s playing at the festival is…. 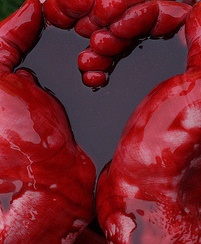 Unwilling to accept the death of her husband, a young widow, acquires a machine that can bring him back to her. But the machine exacts a terrible price: she must provide the blood it needs to revive her beloved. And it starts demanding more and more blood for less and less time.