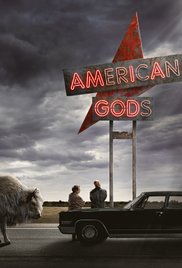 “American Gods” posits a different kind of war brewing — one between Old Gods and New. The traditional Old Gods, with mythological roots from around the world, fear irrelevance as their believers die off or are seduced by the money, technology, and celebrity offered by the New Gods. Shadow Moon (Ricky Whittle) is an ex-con who, left adrift by the recent death of his wife, becomes bodyguard and traveling partner to conman Mr. Wednesday (Ian McShane). But in truth, Mr. Wednesday is a powerful old deity, on a cross-country mission to build an army and reclaim his lost glory.

American Gods demands to be seen on the biggest screen in your house. It is so visually impressive in its scope and imagination, experiencing American Gods on anything less than a 50-inch TV is a waste.

The Starz adaptation of Neil Gaiman’s bestselling fantasy novel is so outrageous in its ambitions and so spectacular to look at, you may get caught up in the illusion and wonder only later, “What the heck was that about?”

The new Starz series American Gods, based on Neil Gaiman’s Hugo- and Nebula award-winning 2001 novel of the same name, offers a cure for moderate to severe sagaphobia.

Stridently daring, unique, and unapologetically bizarre. You won’t be able to turn away.

American Gods is mythic in scope. Almost a Game of Thrones set inside our world. You can feel elements of other programs in this series, but it’s also unique in the television landscape.

American Gods is violent, gory, sexual, grimy and eccentric. It’s also one of the most beautiful, sensual and invigorating new television series that takes every aspect of show-running Bryan Fuller is known for and accentuates it.